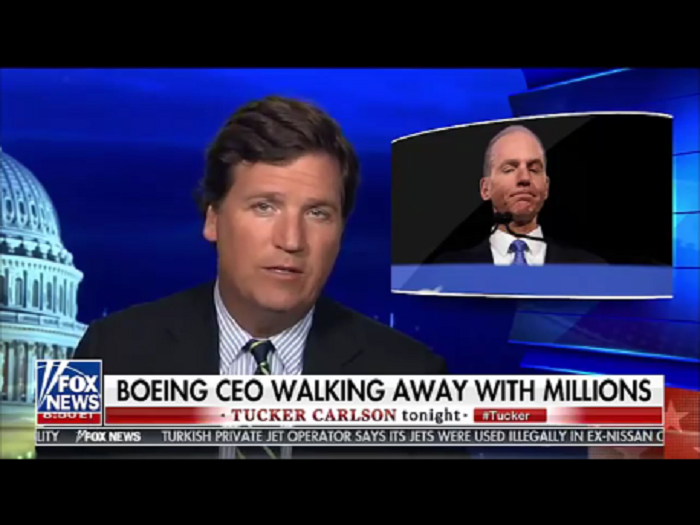 Tucker Carlson:  For more than 100 years the Boeing company has led international aviation. To this day it’s measured by dollar amounts. Boeing remains America’s single largest foreign exporter. But now like so many American institutions, Boeing is in trouble.  Last year the company’s latest generation of 737 airplanes was grounded worldwide following several horrifying crashes. There’s still no sign the planes will be allowed back in the air anytime soon. Production is being suspended. In business terms, this is a disaster, both for the company and for the airlines. How did it happen?

Well, at least part of the responsibility lies with CEO Dennis Muilenburg who has been in charge at Boeing since 2015. Fittingly, Muilenburg is now being fired, which on the face of it sounds like good news. Someone in corporate America is finally being held accountable for screwing up. But before you celebrate, wait for the fine print.  According to recent SEC filings, Muilenburg is walking away with more than $26 million in cash and stock, $26 million. That’s his punishment. And by the way, that figure could more than double to over $50 million depending upon the final terms of the settlement.

Here’s some context for how much money that is. A rank and file employee at Boeing might make $60,000 a year. That’s a decent salary in many places. It would take a worker more than 400 years to earn as much as the supposedly disgraced Dennis Muilenburg is getting in his severance package.  In other words, for his work presiding over deadly airplane crashes, Muilenburg is walking off with enough money to pay the median income for 420 American households.

And if that sounds perverse to you, keep in mind it’s no longer unusual.  Since 1978 CEO salaries in America’s largest corporations have risen by a factor of more than 10. Meanwhile, and this is the critical point, average workers have seen their wages stagnate — in some cases decline. In 1965, CEOs in this country earned 20 times as much as regular employees. As recently as 1989, they out earned employees just 58 to one. Today, that ratio has risen to 278 to 1.

No wonder people are sending money to Bernie Sanders. That’s what happens when you abuse the system. You discredit capitalism, and big business has in many cases done exactly that. Now, keep in mind, this isn’t happening everywhere on the globe. In Europe, for example, the disparities are much less stark. Airbus CEO Tom Enders made 10 million dollars in 2017. That’s a lot, but it was half as much as Boeing’s Dennis Muilenburg made, and Airbus planes didn’t even crash.

This is an ugly trend, but it’s actually worse than that. It’s dangerous for our country. Why? Well, because when normal people see their lives getting worse while failures like Dennis Muilenburg get rich beyond description, many, not surprisingly, conclude that our system is rotten and not worth keeping, and the polls show that’s happening right now. Attitudes are changing fast. Thanks to stories like this one, Americans are warming shockingly to socialism. Six months from now, a socialist could be the Democratic nominee for president. In a few years, this could easily be a socialist country. What would that look like?

Well, of course it would be a disaster. Socialism doesn’t work. It never has worked, especially not in sprawling, diverse countries like this one. Under a socialist regime, hundreds of millions of Americans would see their lives get dramatically worse, while demagogic morons like Alexandria Ocasio-Cortez would become vastly more powerful. That’s socialism. You think America is stratified and unequal now? Wait till we get a socialist system. It will be so much worse. That’s coming, by the way and at high speed. Why? Because mindless Chamber of Commerce libertarianism has allowed greed and stupidity to flourish in corporate boardrooms and unless we rein that immediately, right now, we’re going to lose the system that made this country great.

Certified Public Accountants are often characterized as stiff, lifeless, mechanical, humorless, myopic, anal, compulsive, regimented, geeky, and boring; however, in spite of these relatively complimentary epithets, they have been much maligned as well, particularly by marketing individuals. Although all of these characterizations may indeed hit the mark about many CPAs, these stereotypical descriptions do not apply to all CPAs: maybe 99.9% of them, but certainly not 100% of them. In an attempt to set the record straight, and under the penname of the Barefoot Accountant, William Brighenti began writing a blog not only to discuss accounting, taxes, and QuickBooks subjects, but to publicize the CPA's human side, which was, in fact, uncovered quite by accident by Charles Darwin in the 1830s while he was on the Galapagos Islands looking for their fossils, refuting the mistaken belief that CPAs had become an extinct species centuries ago. Hopefully, you may find some of the Barefoot Accountant’s blog postings not only informative but entertaining, since he pokes fun at his colleagues, as well at himself, at every available opportunity. Such publicized irreverence of the accounting profession accounts for much of the disdain expressed towards the Barefoot Accountant throughout the entire Milky Way and beyond by virtually every Certified Public Accountant, who have been applying to the Vatican to reinstate the Inquisition in order to burn him at the stake. Bill has appealed to the Pope for intervention, a plenary indulgence, and a charitable donation made out to cash.
View all posts by William Brighenti, CPA →
This entry was posted in Uncategorized and tagged Accountants CPA Hartford Connecticut LLC, Airbus, Alexandria Ocasio-Cortez, barefootaccountant, Bernie Sanders, Boeing, capitalism, Chamber of Commerce libertarianism, cpa-connecticut.com, Dennis Muilenburg, January 3 2020, socialism, The abuse of capitalism by huge corporations will make America a socialist country, Tom Enders, Tucker Carlson, William Brighenti CPA. Bookmark the permalink.