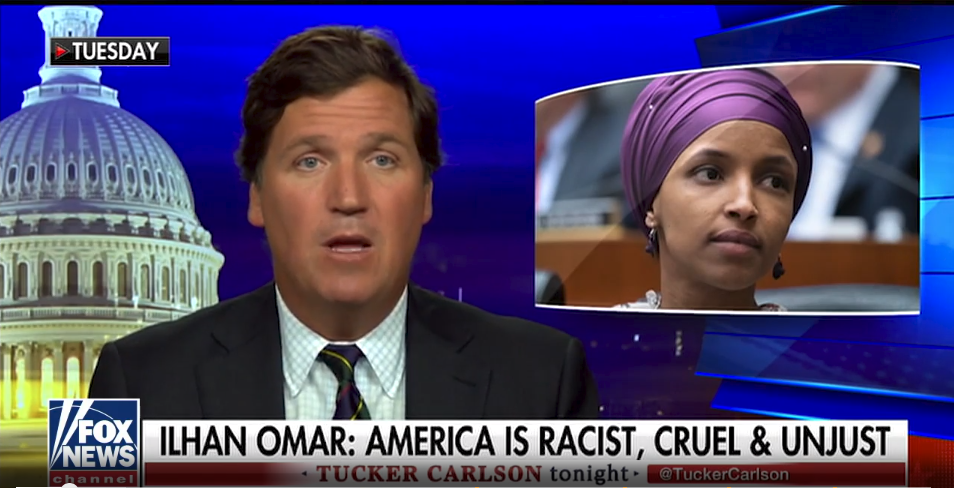 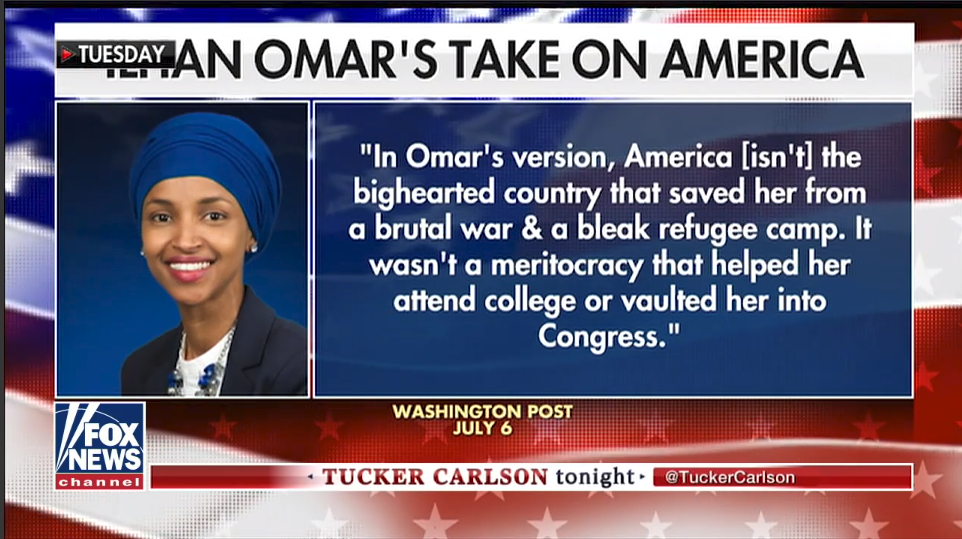 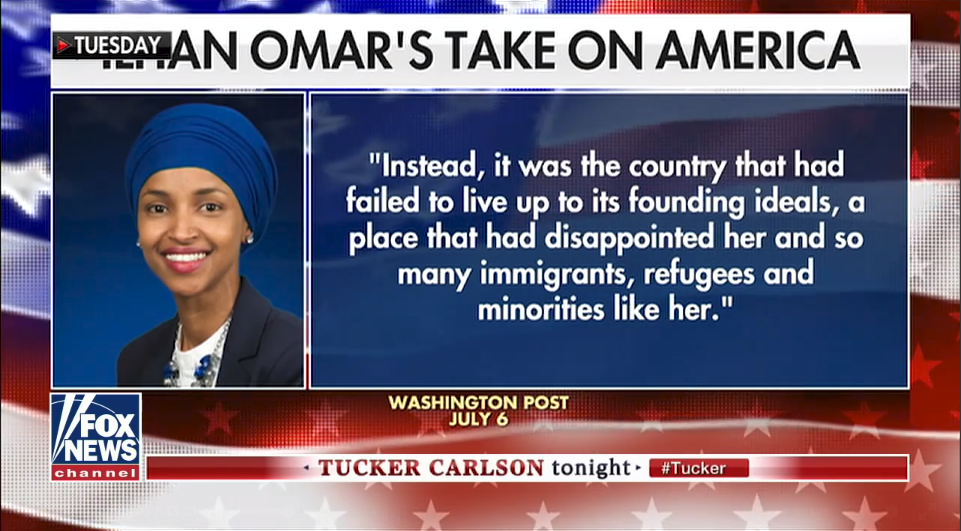 Tucker: No country can survive being ruled by people who hate it

Like many of you, we’ve been watching with amazement and alarm as the leaders of the Democratic Party, day after day, attack the country they say they want to govern.

It’s remarkable, and a very new development. Just a few years ago, even the most liberal Democrats in Congress felt obligated to say patriotic things about America. They may not have felt it, but they said it. Now, it’s routine to hear Democratic presidential candidates question the basic legitimacy of the United States.

That should worry you. No country can survive being ruled by people who hate it. We deserve better. For all of our country’s flaws, this is still the best place in the world. Most immigrants know that and that is why they come here. It’s also why we’ve always been glad to have them here.

But now, there are signs that some people who move here from abroad don’t like this country at all. As we told you last night, one of those people now serves in our Congress.

Think about that for a minute. Our country rescued Ilhan Omar from the single poorest place on Earth. We didn’t do it for the money, we did it because we are kind people. How did she respond to the remarkable gift we gave her?

No country can survive being ruled by people who hate it. We deserve better. For all of our country’s flaws, this is still the best place in the world. Most immigrants know that and that is why they come here. It’s also why we’ve always been glad to have them here.

— Tucker Carlson
She scolded us, called us names, showered us with contempt. It’s infuriating. More than that, it is also ominous. The United States admits more immigrants more than any other country on Earth, more than a million every year. The Democratic Party demand we increase that by and admit far more. OK, Americans like immigrants, but immigrants have got to like us back.

We made that point last night. We will continue to make that point because it’s true and it’s important to say it out loud even if no one else is willing to.

In some ways, the real villain in the Ilhan Omar story isn’t Omar, it is a group of our fellow Americans. Our cultural gatekeepers who stoke the resentment of new arrivals and turn them into grievance mongers like Ilhan Omar. The left did that to her, and to us. Blame them first.

— Tucker Carlson
They hate it when you say true things. Ilhan Omar and her allies in Congress immediately demanded that this show be pulled off the air. They didn’t rebut what we said, any of our points, or even acknowledge them. They just try to silence us.

That is how they operate.

Of course, they called us racist. On one level that is amusing given how absurd the charges. This show, more than any other show on television, has taken an aggressive position in favor of color-blind equality and against racism, particularly the casual racism of the modern left.

We despise the current habit of judging people on the basis of their skin color. It’s wrong. We see that virtually every night. Racist? Now, we are against racism adamantly. Omar consistently puts her own race at the center of the conversation, but to us, it’s irrelevant.

Rep. Ilhan Omar (D-MN): What to knowVideo
Ayaan Hirsi Ali would, by the standard of identity politics, seem to have everything in common with Ilhan Omar. She was born in Somalia, moved to Kenya and eventually came to this country. Unlike Omar, she loves and cares about the United States. She believes this country is superior to the country she came from.

For saying that, the left despises her. Two Somali immigrants, one among the most impressive people in America. The other, among the least.

It’s not about race. But, of course, Omar and her friends already know that. Nothing they say on the subject of race is sincere. It’s all the hustle designed to get them what they want. Omar has made a career of denouncing anyone and anything in her way as racist. That would include virtually all of her political and personal opponents. It includes even inanimate objects like the border wall, that’s racist. So was the Congress, so is the entire state of North Dakota, she once tweeted.

Omar may be from another country but she learned young that crying racism pays. The bigger question is, who taught her that? She didn’t arrive from a Kenyan refugee camp announcing people as bigots for a political campaign. She wasn’t always a professional victim. That is learned behavior.

Importantly, she learned it here. In some ways, the real villain in the Ilhan Omar story isn’t Omar, it is a group of our fellow Americans. Our cultural gatekeepers who stoke the resentment of new arrivals and turn them into grievance mongers like Ilhan Omar. The left did that to her, and to us.

Certified Public Accountants are often characterized as stiff, lifeless, mechanical, humorless, myopic, anal, compulsive, regimented, geeky, and boring; however, in spite of these relatively complimentary epithets, they have been much maligned as well, particularly by marketing individuals. Although all of these characterizations may indeed hit the mark about many CPAs, these stereotypical descriptions do not apply to all CPAs: maybe 99.9% of them, but certainly not 100% of them. In an attempt to set the record straight, and under the penname of the Barefoot Accountant, William Brighenti began writing a blog not only to discuss accounting, taxes, and QuickBooks subjects, but to publicize the CPA's human side, which was, in fact, uncovered quite by accident by Charles Darwin in the 1830s while he was on the Galapagos Islands looking for their fossils, refuting the mistaken belief that CPAs had become an extinct species centuries ago. Hopefully, you may find some of the Barefoot Accountant’s blog postings not only informative but entertaining, since he pokes fun at his colleagues, as well at himself, at every available opportunity. Such publicized irreverence of the accounting profession accounts for much of the disdain expressed towards the Barefoot Accountant throughout the entire Milky Way and beyond by virtually every Certified Public Accountant, who have been applying to the Vatican to reinstate the Inquisition in order to burn him at the stake. Bill has appealed to the Pope for intervention, a plenary indulgence, and a charitable donation made out to cash.
View all posts by William Brighenti, CPA →
This entry was posted in Uncategorized and tagged Ilhan Omar, July 10 2019, transcript, Tucker Carlson, Tucker Carlson investigates Rep. Ilhan Omar's extremist views Video and Transcript, Tucker Carlson Tonight, vide. Bookmark the permalink.