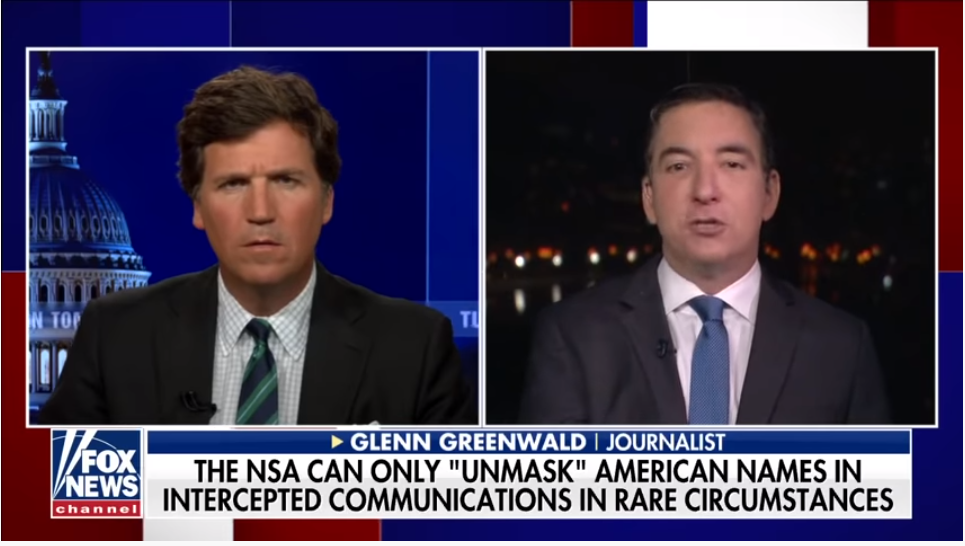 Well, a media outlet called “The Record,” which is owned by a cybersecurity company recently published a story about the N.S.A.’s monitoring of this show, effectively admitting that it happened. Our identity, “The Record” said was included in an Intel intercept and then quote, “unmasked.”

Intercepted — “The Record” rather did not explain how that would be legal, but it happened as we said it did.

Glenn Greenwald is an independent journalist. You can read him and you should on “Substack,” which is an unfiltered and uncontrolled website for people who are independent.

Glenn, thanks so much for coming on tonight. So, unmasked.

Why in the world would the U.S. government be unmasking journalists, particularly ones who are critical of them?

GREENWALD: But that is, I think — yes, I mean, you should have given me a warning. I’m really on the verge of tears myself here after having heard that.

GREENWALD: You know, I think the critical question is exactly what you just asked, which is — let’s remember that the fundamental principle is that the N.S.A. is not supposed to be using its spying powers on American citizens unless it gets a warrant, which obviously didn’t have with regard to you.

Sometimes though, they do find out things that you’re doing or saying if you’re for example talking to somebody who they are spying on or people they’re spying on are talking about things you said or done, and when that happens, there are supposed to be protections in place for American citizens. They are supposed to hide your identity so that your privacy isn’t invaded, which is what happens when they learn things that you’re doing without a warrant.

In limited circumstances, they have the right to unmask the identity of the American citizen who appears in their record and then disseminate it through the Intelligence Community. For example, if they listen to people saying we want to kill Journalist A, of course they would want to unmask it to warn the journalist that they’re being targeted. None of that happened here.

And yet, where is the media complaining about that “The Washington Post” actually published a story by their media critic, Erik Wemple who has no experience reporting on surveillance justifying that the N.S.A. did this and claiming that you have no grounds for complaining about it. What conceivable justification is there, Tucker, for the N.S.A. to have gone and said, we want to know this journalist’s name who is trying to get an interview with Vladimir Putin?

And the reason the media doesn’t care, and in fact supports the N.S.A. is because they’re on the side of the Intelligence Community and are very happy when those powers are abused for ideological ends against their ideological enemy, which I’m sorry to say includes you.

CARLSON: Well, that’s exactly what it was. I mean, they spread to news outlets that I was talking to Russians in an effort to discredit and then control me. Of course, that’s the point. That’s why we don’t allow it.

So, I want to get your reaction, speaking of Federal powers that may be abused. BuzzFeed reported that most of the people involved in that famous plot, right before the election, to kidnap the Governor of Michigan, Gretchen Whitmer were in fact working for the F.B.I. You’ve covered a lot of these stories over the years. Were you surprised by that — most of them were working for the F.B.I.?

GREENWALD: You know, I think that as Americans, we are trained — and I know, even after all the reporting I’ve done to kind of reflexively disbelieve that the F.B.I. could do something like involve itself in a plot and then either encourage it or allow it. We all have that kind, no, that wouldn’t have happened.

But what I’m telling you is, I spent a decade during the first war on terror — this is the second war on terror — reporting in one case after the next where the F.B.I. would say, we caught four young Muslims plotting to blow up a bridge, and in almost every case, it turned out that these four young Muslims were not very smart, we’re emotionally unstable, we’re financially vulnerable, and the only plot that was created was one that was created by the F.B.I. that brought it to them and then used their knowhow of psychological manipulation to lure them into it.

The informants who were paid would do everything possible to get them to agree to it, then the F.B.I. would announce, oh we found this plot that was actually the F.B.I.’s plot in the first place.

GREENWALD: So, the only unanswered question that that committee should be asking, instead of in between all the sobbing and weeping and stuff is, what role did the F.B.I. have in terms of being embedded in the three groups they claim plotted this attack on the Capitol? And did they purposely allow it to go forward? Because as the F.B.I. has admitted, we need the citizenry in fear in order to increase our budget, in order to increase our surveillance authorities.

And the one relevant question about January 6th that hasn’t been answered is the one that the media and the Congress has declared off limits to ask.

CARLSON: Boy, they hate it, and in fact, Republican Members of Congress were given instructions by their leaders not to push the F.B.I. on this, which is just mind-blowing, but we should push. I think, we should, and thank you for doing it.

Glenn Greenwald of “Substack.” Great to see you.

GREENWALD: Good talking to you, Tucker.

Certified Public Accountants are often characterized as stiff, lifeless, mechanical, humorless, myopic, anal, compulsive, regimented, geeky, and boring; however, in spite of these relatively complimentary epithets, they have been much maligned as well, particularly by marketing individuals. Although all of these characterizations may indeed hit the mark about many CPAs, these stereotypical descriptions do not apply to all CPAs: maybe 99.9% of them, but certainly not 100% of them. In an attempt to set the record straight, and under the penname of the Barefoot Accountant, William Brighenti began writing a blog not only to discuss accounting, taxes, and QuickBooks subjects, but to publicize the CPA's human side, which was, in fact, uncovered quite by accident by Charles Darwin in the 1830s while he was on the Galapagos Islands looking for their fossils, refuting the mistaken belief that CPAs had become an extinct species centuries ago. Hopefully, you may find some of the Barefoot Accountant’s blog postings not only informative but entertaining, since he pokes fun at his colleagues, as well at himself, at every available opportunity. Such publicized irreverence of the accounting profession accounts for much of the disdain expressed towards the Barefoot Accountant throughout the entire Milky Way and beyond by virtually every Certified Public Accountant, who have been applying to the Vatican to reinstate the Inquisition in order to burn him at the stake. Bill has appealed to the Pope for intervention, a plenary indulgence, and a charitable donation made out to cash.
View all posts by William Brighenti, CPA →
This entry was posted in Uncategorized and tagged Barefoot Accountant, Erik Wemple, FBI CIA NSA are not only spying on American citizens but also are illegally unmasking their identities to journalists who support our fascist government, Glenn Greenwald, Intelligence Community, January 6th, July 28 2021, NSA, Substack, The Record, The Washington Post, Tucker Carlson, Tucker Carlson Tonight, William Brighenti. Bookmark the permalink.