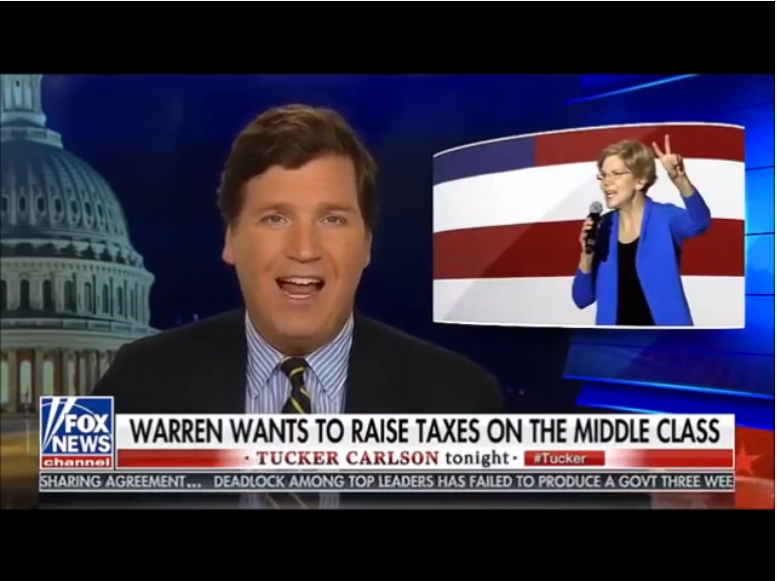 Democrats have an awful lot of ambitious spending plans ready to go if they retake the White House: Medicare for All (and all means illegal aliens), the Green New Deal, race-based reparations, etc., etc.. All of this is going to cost a lot of money, more than this country has spent, at least, since the Second World War. How are they going to pay for it?

Well, a new piece in The New York Times suggests how; it’s one of their favorite plans: abolish the cap on the payroll tax. Elizabeth Warren says she wants to hike the actual tax rate, too. So what would this mean?

Well, it would mean a massive tax hike for all middle income families that rely primarily on wages. Now this is the point to note: normal people rely on the money they make every two weeks. The people in charge of everything rely on dividends for which they are taxed one-half the rate of everyone else. So this tax plan would not harm the sinister rich that Elizabeth Warren bashes while depending on their donations; no, it would harm doctors, lawyers, dentists, software programmers, small business owners, people who are stuck working in America’s most expensive cities, who are paying off the most in student loans. They’re the ones who have to pay full freight for health care, child care, tuition, everything else, because they don’t qualify for any program. These are the people paying for everything and getting shafted.

The New York Times calls these people “the affluent” but, in fact, most of them are part of the middle class, the middle class that is declining as it gets more and more overstressed. But Democrats are ready to hurt these people, soak them even more in taxes because every dime
extracted from them is a dime that doesn’t have to come from the Democratic Party’s actual base: the ultra wealthy, in many cases, inherited wealthy in Silicon Valley, in Wall Street, and Washington DC.

Just so you know, they’re not gonna soak the rich; they’re gonna soak you.

Certified Public Accountants are often characterized as stiff, lifeless, mechanical, humorless, myopic, anal, compulsive, regimented, geeky, and boring; however, in spite of these relatively complimentary epithets, they have been much maligned as well, particularly by marketing individuals. Although all of these characterizations may indeed hit the mark about many CPAs, these stereotypical descriptions do not apply to all CPAs: maybe 99.9% of them, but certainly not 100% of them. In an attempt to set the record straight, and under the penname of the Barefoot Accountant, William Brighenti began writing a blog not only to discuss accounting, taxes, and QuickBooks subjects, but to publicize the CPA's human side, which was, in fact, uncovered quite by accident by Charles Darwin in the 1830s while he was on the Galapagos Islands looking for their fossils, refuting the mistaken belief that CPAs had become an extinct species centuries ago. Hopefully, you may find some of the Barefoot Accountant’s blog postings not only informative but entertaining, since he pokes fun at his colleagues, as well at himself, at every available opportunity. Such publicized irreverence of the accounting profession accounts for much of the disdain expressed towards the Barefoot Accountant throughout the entire Milky Way and beyond by virtually every Certified Public Accountant, who have been applying to the Vatican to reinstate the Inquisition in order to burn him at the stake. Bill has appealed to the Pope for intervention, a plenary indulgence, and a charitable donation made out to cash.
View all posts by William Brighenti, CPA →
This entry was posted in Uncategorized and tagged 1%, dividends tax is half of tax on wages, dividends taxed at 15%, Elizabeth Warren, Elizabeth Warren's tax plan soaks the middle class and gives a huge tax break to the rich, middle class, transcript November 22 2019, Tucker Carlson, Tucker Carlson Tonight, ultra rich, uncap the social security tax, Warren raising payroll tax rate. Bookmark the permalink.