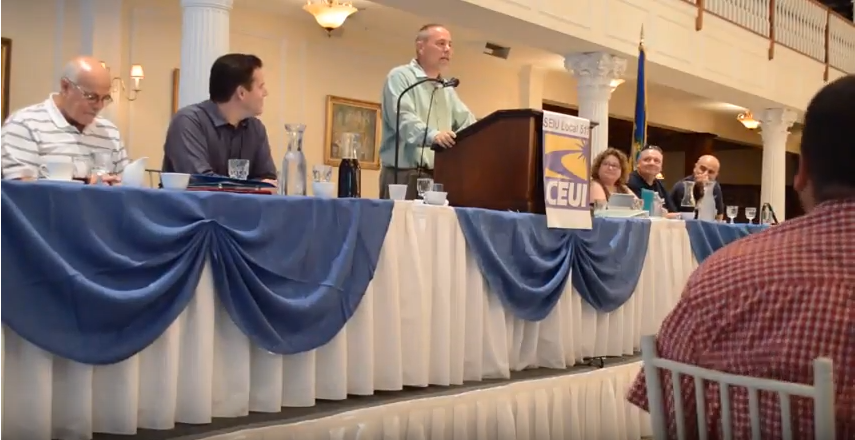 First and foremost, good afternoon, brothers and sisters. How are we going today, alright? I always start this off, yes I do have a position as House Majority Leader and the State Representative from Berlin and Southington. And I am really proud of that, and I have a great job, and I’m able to help people in my district on a daily basis and also help people statewide.

But more importantly I’m a twenty-three year member and dues-paying member of AFSCME, which leaves me almost ready to retire, including time if I would add this duty which I worked at directly to protect your rights. That’s the most important aspect of my career. I would give up the political side of it in a minute and keep working to protect union members rights on a daily basis in the State of Connecticut. So that’s why I always agree with the brothers and sisters, and we talked about that.

Now I know some of you have seen a video tape of me cruising around on the internet. No, not that kind. The one from the Wisconsin presentation that we did in Middletown. I don’t know how many you know the story so I am going to boil it down a little bit for you here today. But I think we need to talk about it. Because I went to Wisconsin right after Governor Walker was elected. I went out there when the bill was cruising its way through their General Assembly thinking what can I do. On my own time I went out there and started knocking on doors.

I spent a long time in the Capitol. One of the days that I was there it was announced either a quarter of a million to a half a million people circling outside the capitol and also inside the capitol. For me being a life-long union member, and as my cousin can tell you that my father was fired for trying to organize a union. So that’s all I’ve ever known. It was probably one of the most powerful moments in my life, and you know, you get the little bumps on the back of your neck, your hair standing up, we’re chanting, we’re caring signs: I thought we were taking over the capitol.

So I straddled up to this gentleman, he was wearing a red shirt that said Wisconsin educator, so it was either college or school, and he started talking about what we were doing there. And I said, “Brother, this is the greatest moment I have ever been involved in my life. We finally said as union members, enough is enough: we’re not going to take it anymore.” And the guy looked over at me and said where are you from, and I said from Connecticut. I am AFSCME member. Well, AFSCME member from Connecticut, the fight we already lost. We’re not rallying because we’re pissed off. But when we could have avoided it in April, May, June, July, August, September, October, and I was begging all of my members to get actively involved in this campaign, because I told them all what was at risk, I heard every story in the world. I heard that my son’s got a ball game. My aunt’s sick. My grandmother has this. So Mr. AFSCME from Connecticut, thanks a lot coming out but my members gave away their rights, and they did it in the months leading up to the election.

So what I thought was a great moment actually kind of humbled me a little bit. So one of the things that I swore to myself was that I was not I’m going to let it happen here in Connecticut. That at least I would do as many tours of this statem including Middletown, CSEA Locals, AFSCME, CEUI, anybody I could talk to, to ensure that that would never happen in Connecticut.

Now come April May June July August of this year, if I told you with 18 days to go it was a dead heat, that our rights were quite possibly going to be protected for the next four years, at least, I think you would take that bet. I think you would look at yourself in the mirror and say, sure because right now it doesn’t look that way because the Governor’s office is in jeopardy, the Senate was in jeopardy, and even my chamber, the House: we’re looking at possibly losing seats.

You guys have one of your own that sits in the caucus room of the General Assembly. You cannot replicate that. The reason I originally ran for office is Dennis O’Neil begged me to run for office because too many times the door closes on that Caucus. And even the smiles and the claps on your back, “don’t worry, we got your back.” And that door closes and somehow you come out and your back doesn’t feel so comfortable anymore. And maybe they went a little lower in your back. And that’s reality.

So you’ve Russ over there in Wethersfield that is one of your members, that when the negotiations are tough, when you’re on the menu instead of being at the table, he’s there to ensure that he is that back stop. He’s in a tough race. Eighteen days to go, if half of this room goes out and door knocks his district, he wins by a landslide. And talks to the members about the issues that are important to you.

Same thing for the Gubernatorial race. Eighteen days, eighteen days to decide whether you keep your collective bargaining rights because as much as he says he was talking about chambers and agreeing, we know exactly what Tom Foley wants: his Wisconsin moment. And if you really don’t believe it, come with me the rest of the day, I’ll hang out and talk to you, all the little articles I’ve seen, all the things he said, a lie, he really means that.

We want collective bargaining and not collective begging. Eighteen days. Please don’t let me stand up outside the Connecticut capitol and have the same conversation with an individual this time with a Connecticut t-shirt on. I’m talking about how nobody turned up, and how this moment didn’t necessarily have to happen. The last thing we need is a Wisconsin moment in Connecticut. Absolute last thing. I say at all these meetings and groups that I talk to I will never allow an anti-collective bargaining bill to be called to the House floor. I’m the Majority Leader. I can make that guarantee.

If I’m the Minority Leader, not so much. All I can do is I’ll talk as long as I can to avoid them running that bill. So a lot of things are at stake. You know, I know you’ve been hearing it at night and I know at some point we say enough is enough. The numbers of the polls look better, the House will be okay, the Senate is going to be okay, the gubernatorial is a tossup.

I beg of you, I begged, I begged, and I beg again: please don’t allow us to wake up on November 5th, open up your newspaper and realize that because we needed to do what we needed to do in eighteen days, we’re now having to take to the streets. We’re now having to rally at the capitol. There’s a lot at stake. I beg you to get involved in Russ’s campaign, call up your local committees who are working the phones. Get out and get to work. It’s eighteen days to ensure we have benefits for the near future.

You guys have a great evening, proud members, you made this state what it is. Don’t let it go away with one election. Please stand together, stand as brothers and sisters, and be a family and make sure we are looking out for our own. Thank you.

[End of speech by Joe Aresimowicz.]

[We attempted to transcribe this speech as accurately as possible but due to the quality of the audio, please be advised of imperfections. We apologize for any errors; please advise of any necessary corrections.]

Certified Public Accountants are often characterized as stiff, lifeless, mechanical, humorless, myopic, anal, compulsive, regimented, geeky, and boring; however, in spite of these relatively complimentary epithets, they have been much maligned as well, particularly by marketing individuals. Although all of these characterizations may indeed hit the mark about many CPAs, these stereotypical descriptions do not apply to all CPAs: maybe 99.9% of them, but certainly not 100% of them. In an attempt to set the record straight, and under the penname of the Barefoot Accountant, William Brighenti began writing a blog not only to discuss accounting, taxes, and QuickBooks subjects, but to publicize the CPA's human side, which was, in fact, uncovered quite by accident by Charles Darwin in the 1830s while he was on the Galapagos Islands looking for their fossils, refuting the mistaken belief that CPAs had become an extinct species centuries ago. Hopefully, you may find some of the Barefoot Accountant’s blog postings not only informative but entertaining, since he pokes fun at his colleagues, as well at himself, at every available opportunity. Such publicized irreverence of the accounting profession accounts for much of the disdain expressed towards the Barefoot Accountant throughout the entire Milky Way and beyond by virtually every Certified Public Accountant, who have been applying to the Vatican to reinstate the Inquisition in order to burn him at the stake. Bill has appealed to the Pope for intervention, a plenary indulgence, and a charitable donation made out to cash.
View all posts by William Brighenti, CPA →
This entry was posted in Uncategorized and tagged 2014 CEUI Convention, AFSCME, Berlin Connecticut, CEUI, Collective Bargaining, Connecticut General Assembly Majority Leader, Connecticut General Assembly Majority Leader Joe Aresimowicz speaking at the 2014 CEUI Convention, Connecticut House, District 30 State Representative, Does Joe Aresimowicz put his constituents in the 30th Connecticut House District first or public employee unions first?, General Assembly, Joe Aresimowicz, public employee unions, Southington Connecticut, Speaker of Connecticut House of Representatives Joe Aresimowicz speaking at the 2014 CEUI Convention, transcript of speech. Bookmark the permalink.