The mainstream media and the Democratic Party and the intelligence agencies and the tech monopolies are your enemies. Like fascists they are misleading you with propaganda so that you will obey. 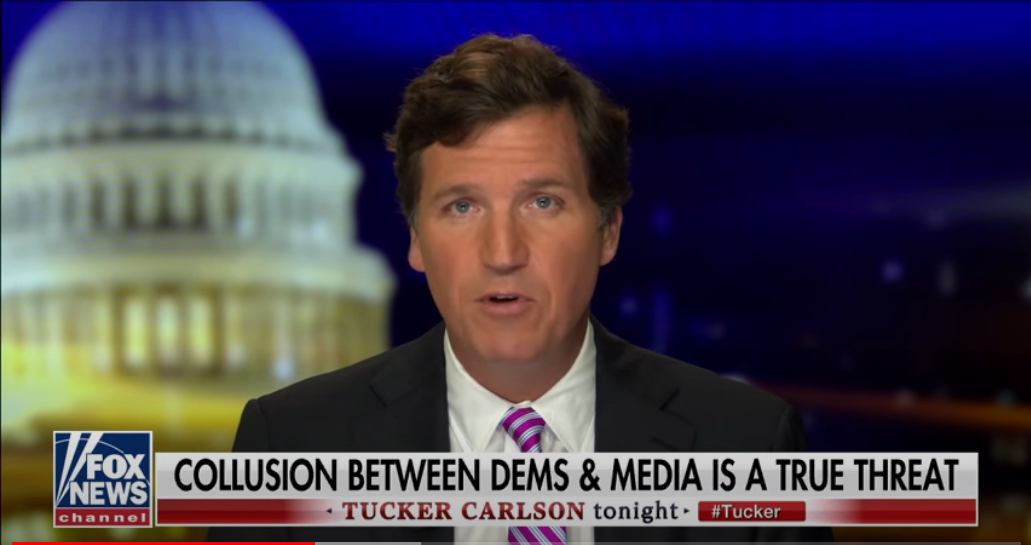 Tucker Carlson: Hunter Biden scandal shows media collusion with powerful is the real threat to America
When journalists strike secret alliances with the very people they’re supposed to be holding accountable, we are in deep trouble.

Editor’s Note: This article is adapted from Tucker Carlson’s opening commentary on the Oct. 30,2020 edition of “Tucker Carlson Tonight.”

Tucker Carlson: Media collusion is the real threat to democracy

For five years, we have watched the news media treat Donald Trump in a way that no American president has ever been treated. Richard Nixon himself — disgraced and forced to resign his office in the end — got a pass by comparison.

Reporters hate Trump with an all-consuming mania. They hate him so intensely that at times it’s been amusing to watch. If Donald Trump announced a cure for cancer at one of his rallies, CNN would denounce him for fixing drug prices.

If you’re a fair minded person, all this has been infuriating. Not only is it dishonest, it’s also patronizing because it’s almost unbelievably stupid.

“Trump spied for Russia! Trump works for Putin! Trump’s a racist because he likes borders and doesn’t want to live in Haiti!”

Clearly, all the smart kids went into finance. America’s websites and TV stations got the rest.Unfortunately, we’ve got to live with the consequences of that.

But as grating as all of this is, unremitting hostility to the president of the United States is far from the greatest threat America faces. Reporters are supposed to be tough on people with power. That’s why we have journalism, to keep a close eye on those who have outsized influence over our lives.

The people we should watch carefully include business moguls, the intelligence agencies, prominent academics, cultural figures, military leaders, and most obviously, our politicians. The rest of us can’t really know what the people in charge are doing at all times. A reporter’s job is to find out and tell us.

So in the end, the real threat to America isn’t too many nasty questions from reporters. It’s the opposite of that. The real threat is collusion. When journalists strike secret alliances with the very people they’re supposed to be holding accountable, we are in deep trouble. Lies go unchallenged.  Democracy cannot function. And that’s what we’re watching right now.

Thursday, we learned that the FBI is conducting an active investigation into Joe Biden’s son for business deals that apparently included his father, the former vice president. That is not speculation. It is confirmed. Former Biden business partner Tony Bobulinski sat for a five-hour interview with six FBI agents last week. They asked him about his business dealings in China with the Biden family.

Now, we don’t know if this investigation will result in indictments, but we know that it could. That’s significant because Joe Biden, as you may have heard, is running for president. The election is on Tuesday.  So by any possible measure, this is a blockbuster, stop-the-presses news story. It’s not some naughty picture from somebody’s laptop. This is a criminal investigation into business deals that we know for a fact Joe Biden was party, too.

We’re not overstating any of this. We wish we were. The people you’re supposed to be able to trust are dismissing a completely legitimate, verified news story.

These people wouldn’t know “Russian disinformation” if it got into the shower with them. They know nothing. Russia didn’t forge these emails on Hunter Biden’s laptop. Vladimir Putin didn’t invent the two separate meetings that Tony Bobulinski had with Joe Biden to discuss business in China, the business the FBI is now investigating in an active criminal investigation. That’s all entirely real. It happened. It is happening now. And the media know that it did. Yet they’re telling you it’s all fake, a concoction of a hostile foreign power.

So you have to ask yourself: At some point, why would they tell you what they know is not true? Because these people are not your allies. They’re not trying to help you or inform you. Just the opposite.

These people are your enemies. They are misleading you so that you will obey, and maybe it’ll work. Maybe they will get Joe Biden elected president next week without asking the most basic questions or vetting him in any way. That’s the gambit.

But what then? Many of these people will then go to work for Biden officially. We’d expect that because without Donald Trump to hyperventilate over, the business models at many news outlets will collapse and these people will need jobs. But Joe Biden and Kamala Harris can’t hire everyone at NBC. Some of these people have to continue to be “journalists.”

The question is, can they really do that? Can they keep playing pretend live on your screen every night after everything we have just witnessed.

Certified Public Accountants are often characterized as stiff, lifeless, mechanical, humorless, myopic, anal, compulsive, regimented, geeky, and boring; however, in spite of these relatively complimentary epithets, they have been much maligned as well, particularly by marketing individuals. Although all of these characterizations may indeed hit the mark about many CPAs, these stereotypical descriptions do not apply to all CPAs: maybe 99.9% of them, but certainly not 100% of them. In an attempt to set the record straight, and under the penname of the Barefoot Accountant, William Brighenti began writing a blog not only to discuss accounting, taxes, and QuickBooks subjects, but to publicize the CPA's human side, which was, in fact, uncovered quite by accident by Charles Darwin in the 1830s while he was on the Galapagos Islands looking for their fossils, refuting the mistaken belief that CPAs had become an extinct species centuries ago. Hopefully, you may find some of the Barefoot Accountant’s blog postings not only informative but entertaining, since he pokes fun at his colleagues, as well at himself, at every available opportunity. Such publicized irreverence of the accounting profession accounts for much of the disdain expressed towards the Barefoot Accountant throughout the entire Milky Way and beyond by virtually every Certified Public Accountant, who have been applying to the Vatican to reinstate the Inquisition in order to burn him at the stake. Bill has appealed to the Pope for intervention, a plenary indulgence, and a charitable donation made out to cash.
View all posts by William Brighenti, CPA →
This entry was posted in Uncategorized and tagged China, CNN, Democratic Party, FBI, Fox News, Hunter Biden's laptop, Joe Biden, journalists, NBC, reporters, Russia, Russian disinformation, tech monopolies, the Biden family, The mainstream media and the Democratic Party and the intelligence agencies and the tech monopolies are your enemies. Like fascists they are misleading you with propaganda so that you will obey, Tony Bobulinski, Tucker Carlson Tonight, Vladimir Putin. Bookmark the permalink.