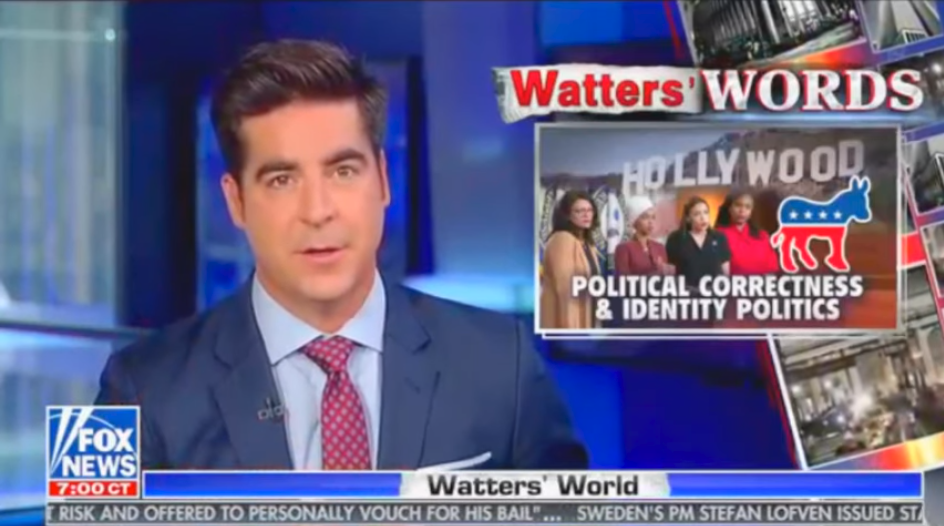 Welcome to Watters’ World. I’m Jesse Waters. The beginning of the end: that is the subject of tonight’s Watters’ World; political correctness and identity politics, two poisons that liberals uncorked on America.

These tools are used as a weapon against the right and as a shield for the left. “You can’t say that, that’s offensive,” is their way of controlling and silencing you. Race, gender, sexuality, and immigration status are deployed when they need to protect themselves from legitimate criticism. “How dare you disagree with my policy. You’re just threatened by me because I’m a black, lesbian immigrant.”

Now most normal Americans are sick of this nonsense, and we’re used to it, and we have to be very careful to protect ourselves from being smeared all of the time. But now, ladies and gentlemen, these cheap and lousy tactics have begun to sweep into the left-wing playing field
and they’re getting a taste of how poisonous it can be as the casualties are beginning to stack up.

After AOC suggested Nancy Pelosi was racist for singling her out. Another member of her squad, Congresswoman Tlaib, told Nancy to knock off her criticism because it’s dangerous:

So the Democrat Speaker of the House, Nancy Pelosi, a seasoned veteran in Washington, can’t criticize a small fry freshman Democrat because she’s a woman of color, and that puts her in danger? So her gender and race makes her untouchable. She can say or do whatever she wants and make Nancy’s life hell and cost the Democrats the House but you can’t rebuke her or disagree with her publicly.

Now I’m a straight white male and you should see the threats I get from these crazy lefties. Half of them are from my own mom. I’m not kidding about that.

Scarlett Johansson, great actress, and as a liberal she’s probably one of the biggest. She raised thousands of dollars for Barack Obama and Hillary and has campaigned hard for abortion, gay rights, but that’s not good enough for the PC police. After accepting a role to play a transgender man in the upcoming flick, Rub & Tug, she was forced to drop out of the film when activists demanded an actual trans actor play that part. The casting of Johansson in the movie, Ghost in the Shell, also faced backlash because her character was originally Asian in the source material.

So liberals are now telling the highest paid female actress in a male-dominated Hollywood industry that she can only play straight white female roles? Yep.

I mean, I agree with some of those old examples, but by Whoopi’s logic, now gay actors can’t play straight roles, or an Australian actor, like Hugh Jackman, can’t play an American. I wonder what role Liz Warren can play. The Academy Awards will never be the same. They’re not funny anymore because they don’t even have a host. Why? Because comedian Kevin Hart, another liberal guy and friend of Barack Obama, had to step down from hosting because he made a few gay jokes that he apologized for many times many many years before.

Now I’m not here to defend gay jokes but he’s a comedian, and the Oscars had been criticized tremendously for not featuring enough black talent and nominees and hosts over the years. It’s like an identity politics pretzel: who do you not offend? I guess nobody, because no hosts, no jokes, no radix.

Now we shouldn’t try to offend people but if people are offended, there are worse things to be: we can then make all up and we can all get along afterwards. No, that’s not good enough for everybody.

So no apology is accepted.

Now the next episode you will not even believe. Ready? The CEO of Planned Parenthood, Dr. Leana Wen, a prominent Asian physician, whose organization poured about 30 million into trying to elect Hillary, was just unceremoniously fired by the Board, BuzzFeed News reporting, that Ween refused to use trans-inclusive language. For example, she said women instead of people.

So the left is clearly cannibalizing themselves with the weapons designed to destroy Republicans. They’re turning those very weapons on each other now. It happened to Biden on that debate stage with Kamala. It’s happening in Hollywood and at Planned Parenthood. It’s even happening to Nancy Pelosi.

Best of luck, guys. Now you know how we feel.

Certified Public Accountants are often characterized as stiff, lifeless, mechanical, humorless, myopic, anal, compulsive, regimented, geeky, and boring; however, in spite of these relatively complimentary epithets, they have been much maligned as well, particularly by marketing individuals. Although all of these characterizations may indeed hit the mark about many CPAs, these stereotypical descriptions do not apply to all CPAs: maybe 99.9% of them, but certainly not 100% of them. In an attempt to set the record straight, and under the penname of the Barefoot Accountant, William Brighenti began writing a blog not only to discuss accounting, taxes, and QuickBooks subjects, but to publicize the CPA's human side, which was, in fact, uncovered quite by accident by Charles Darwin in the 1830s while he was on the Galapagos Islands looking for their fossils, refuting the mistaken belief that CPAs had become an extinct species centuries ago. Hopefully, you may find some of the Barefoot Accountant’s blog postings not only informative but entertaining, since he pokes fun at his colleagues, as well at himself, at every available opportunity. Such publicized irreverence of the accounting profession accounts for much of the disdain expressed towards the Barefoot Accountant throughout the entire Milky Way and beyond by virtually every Certified Public Accountant, who have been applying to the Vatican to reinstate the Inquisition in order to burn him at the stake. Bill has appealed to the Pope for intervention, a plenary indulgence, and a charitable donation made out to cash.
View all posts by William Brighenti, CPA →
This entry was posted in Uncategorized and tagged identity politics, Jesse Watters, July 20 2019, political correctness, Political correctness and identity politics are merely the return of the McCarthy and Puritan witch hunts, Watters' World. Bookmark the permalink.