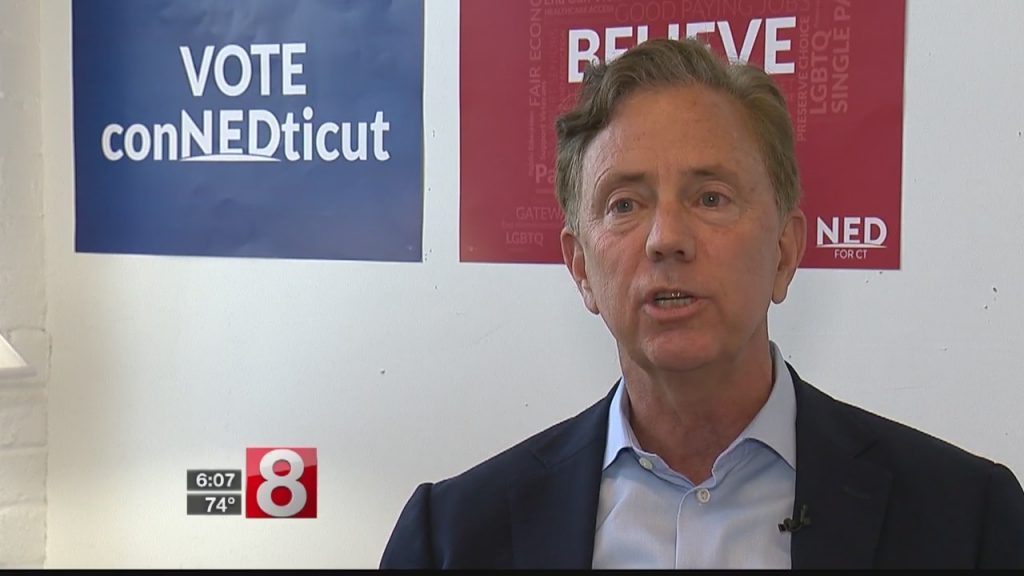 NEWS 8 IS YOUR LOCAL ELECTION HEADQUARTERS…. AND TONIGHT…VOODOO ECONOMICS! CHIEF POLITICAL CORRESPONDENT MARK DAVIS TELLING US HOW REPEALING THE STATE INCOME TAX IS THE LATEST HEATED TOPIC BETWEEN THE CANIDATES FOR GOVERNOR.

DEMOCRAT NED LAMONT IS OPENING A NEW FRONT IN HIS BATTLE AGAINST REPUBLICAN BOB STEFANOWSKI, CALLING HIS PLAN TO CUT AND ELIMINATE THE INCOME TAX, ‘VOODOO ECONOMICS.’

[LAMONT] “AS MOST OF THE REPUBLICANS SAID ABOUT BOB’S PLAN TO ELIMINATE THE INCOME TAX, QUOTE, ‘IT’S AN EMPTY PROMISE.’”

HE SAYS THE CENTRAL STEFANOWSKI CAMPAIGN PROMISE WOULD BE A DISASTER, CUTTING FUNDING FOR EDUCATION, VETERANS, THE ELDERLY AND CAUSE UPWARD PRESSURE ON LOCAL PROPERTY TAXES AS HAPPENED IN KANSAS WHEN A SIMILAR PLAN WAS LAUNCHED FIVE YEARS AGO AND LATER REVERSED.

[LAMONT] “NOT ONLY DID IT DEVASTATE SERVICES, NOT ONLY DID IT MEAN GREAT INCREASES IN THE PROPERTY TAX, BUT IT LEAD TO ENORMOUS UNCERTAINTY IN THE BUSINESS COMMUNITY.”

[LAMONT] “THEMIS HAS BEEN THERE. SHE’S BEEN IN THE TRENCHES. SHE KNOWS HOW TOUGH IT IS TO BALANCE THIS BUDGET.”

BOB STEFANOWSKI HAD TWO EVENTS TODAY. THE NEWS MEDIA WAS NOT ALLOWED AT EITHER ONE OF THEM.

Certified Public Accountants are often characterized as stiff, lifeless, mechanical, humorless, myopic, anal, compulsive, regimented, geeky, and boring; however, in spite of these relatively complimentary epithets, they have been much maligned as well, particularly by marketing individuals. Although all of these characterizations may indeed hit the mark about many CPAs, these stereotypical descriptions do not apply to all CPAs: maybe 99.9% of them, but certainly not 100% of them. In an attempt to set the record straight, and under the penname of the Barefoot Accountant, William Brighenti began writing a blog not only to discuss accounting, taxes, and QuickBooks subjects, but to publicize the CPA's human side, which was, in fact, uncovered quite by accident by Charles Darwin in the 1830s while he was on the Galapagos Islands looking for their fossils, refuting the mistaken belief that CPAs had become an extinct species centuries ago. Hopefully, you may find some of the Barefoot Accountant’s blog postings not only informative but entertaining, since he pokes fun at his colleagues, as well at himself, at every available opportunity. Such publicized irreverence of the accounting profession accounts for much of the disdain expressed towards the Barefoot Accountant throughout the entire Milky Way and beyond by virtually every Certified Public Accountant, who have been applying to the Vatican to reinstate the Inquisition in order to burn him at the stake. Bill has appealed to the Pope for intervention, a plenary indulgence, and a charitable donation made out to cash.
View all posts by William Brighenti, CPA →
This entry was posted in Uncategorized and tagged Bob Stefanowski, Bob Stefanowski will make Sam Brownback look like a socialist in comparison by eliminating the income tax in Connecticut, Connecticut, cut education, cut services, David Stemerman, Democrat, disaster, elimination Connecticut income tax, Governor, Kansas, Mark Davis, Ned Lamont, News 8, raise property taxes, Republican, Sam Brownback, STEVE OBSITNIK, Themis Klarides, TIM HERBST, voodoo economics. Bookmark the permalink.