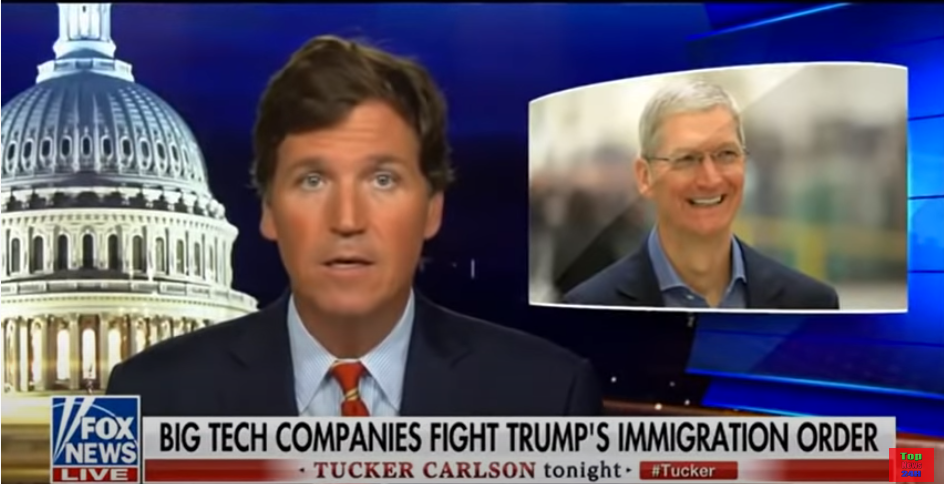 Well, Silicon Valley, the most powerful group of business lobbyists in the world, is now pushing the Trump administration to roll back its executive order on guest workers. They say their concern is diversity. It’s obviously nonsense so what’s the real motivation. We’ll tell you after the break.

Last week we told you about an executive order the President signed blocking new guest worker visas temporarily. This was, of course, in response to the mass unemployment among Americans because of coronavirus. It is a very smart thing to do, a much needed thing to do, one of the best things this President has done.

But we warned you at the time that it would only work if it wasn’t gutted, if it wasn’t watered down. That turned out to be prescient because many people, including some unfortunately inside the administration, would like to do just that.

The President’s order includes a requirement that within 30 days the Secretary of Homeland Security suggests changes to it. Already we are being told that tech companies and their allies in the White House are trying to use this 30 day review period as a way to fatally weaken the order and fill it with loopholes and exemptions. Keep in mind the tech industry is the single most aggressively left-wing part of the American business community. By far this push is being led by the country’s wealthiest tech companies‒—Apple, Google, Amazon, etc. ‒—and it’s not hard to figure out why.

All these companies are happy to lecture you about how America is irredeemably racist. Every day of the week they tell you that. They crow about diversity. Apple’s CEO Tim Cook, of course, is leading the way as always. A week ago when the President’s order came out, Tim Cook tweeted this: quote, 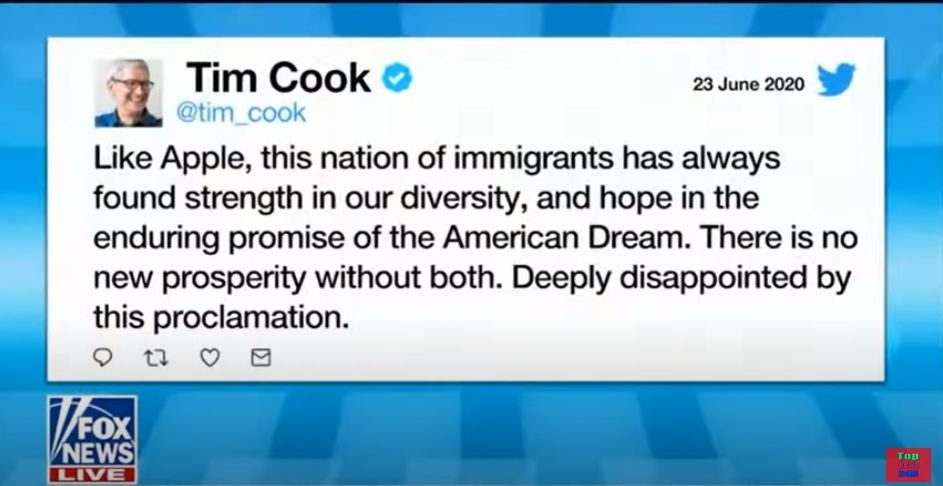 “Like Apple, this nation of immigrants has always found strength in our diversity, and hope in the enduring promise of the American dream. … Deeply disappointed by this proclamation.”

Talk about a non-sequitur. And, of course, it’s more than that: it’s a lie. Tim Cook is not protecting the American Dream in any sense. If he was, he’d want to protect America’s fading middle class but he’s doing the opposite.

The vast majority of H-1B guest worker visas are awarded to a single country: India. That’s not diversity: one country. At this moment in Silicon Valley, 47 percent of all workers were born in foreign countries.

So pausing the H-1B program for even six months will free up tens of thousands of jobs for Americans of all backgrounds. You know those STEM classes your kids are taking, you know the college you’re paying so they can work in the tech field? They’re not going to get those jobs because they’ll be taken by foreign nationals. This might allow them a chance.

So Apple isn’t fighting for diversity. They’re doing exactly what they appear to be doing: they’re trying to keep wages down and keep their workers compliant by importing labor from abroad.

This isn’t about diversity. It’s about exploitation. It always is, and the administration should not fall for it.

Certified Public Accountants are often characterized as stiff, lifeless, mechanical, humorless, myopic, anal, compulsive, regimented, geeky, and boring; however, in spite of these relatively complimentary epithets, they have been much maligned as well, particularly by marketing individuals. Although all of these characterizations may indeed hit the mark about many CPAs, these stereotypical descriptions do not apply to all CPAs: maybe 99.9% of them, but certainly not 100% of them. In an attempt to set the record straight, and under the penname of the Barefoot Accountant, William Brighenti began writing a blog not only to discuss accounting, taxes, and QuickBooks subjects, but to publicize the CPA's human side, which was, in fact, uncovered quite by accident by Charles Darwin in the 1830s while he was on the Galapagos Islands looking for their fossils, refuting the mistaken belief that CPAs had become an extinct species centuries ago. Hopefully, you may find some of the Barefoot Accountant’s blog postings not only informative but entertaining, since he pokes fun at his colleagues, as well at himself, at every available opportunity. Such publicized irreverence of the accounting profession accounts for much of the disdain expressed towards the Barefoot Accountant throughout the entire Milky Way and beyond by virtually every Certified Public Accountant, who have been applying to the Vatican to reinstate the Inquisition in order to burn him at the stake. Bill has appealed to the Pope for intervention, a plenary indulgence, and a charitable donation made out to cash.
View all posts by William Brighenti, CPA →
This entry was posted in Uncategorized and tagged Amazon, Apple, Apple's CEO, Big Tech, Big Tech opposes temporary blocking of H-1B guest worker visas because it wants to give your childrens' jobs to cheap foreign labor, blocking guest worker visas, cheap foreign labor, diversity, Donald Trump, exploitation, Google, H-1B guest worker visas, India, Silicon Valley, STEM, Tim Cook, Tucker Carlson Tonight July 1 2020. Bookmark the permalink.